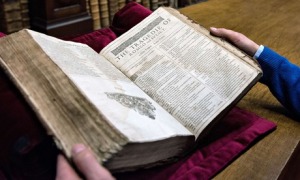 A rare and valuable William Shakespeare First Folio has been discovered in a provincial town in France.

The book – one of only 230 believed to still exist – had lain undisturbed in the library at Saint-Omer in the north of France for 200 years.

Medieval literature expert Rémy Cordonnier was searching for books to use in a planned exhibition of “Anglo-Saxon” authors when he stumbled across the 1623 tome in September.

Cordonnier, a librarian, said that at first he had no idea that the battered book in his hands was a treasure.

“It had been wrongly identified in our catalogue as a book of Shakespeare plays most likely dating from the 18th century,” he said on Tuesday. “I didn’t instantly recognise it as a book of value. It had been heavily used and was damaged. It had seen better days.”

Cordonnier contacted one of the world’s most eminent authorities on Shakespeare, Prof Eric Rasmussen of the University of Nevada in Reno, who – as luck would have it – was in London working at the British Library.

“He was very interested by the elements I had sent him by mail and said he would come over and take a look. He identified it as a First Folio very quickly,” said Cordonnier.

Although the book, originally believed to contain 300 pages, has around 30 pages missing and no title page, it will still be the centrepiece of the French library’s exhibition next summer.

“One of the most interesting things about the book is that the Henry IV play has clearly been performed because there are notes and directions on the pages that we believe date from around the time the book was produced,” Cordonnier said.

The First Folio, entitled Mr William Shakespeares (sic) Comedies, Histories, & Tragedies, was edited and published in 1623 – seven years after the author died – by his colleagues John Heminges and Henry Condell. It included almost all of the plays widely accepted to have been written by Shakespeare and is credited with being the reason his literary legacy survived.

In the 16th century, Saint-Omer was home to an important Jesuit order that welcomed Roman Catholic clergy fleeing Protestant persecution in England. The First Folio discovered in the town is thought to have been brought to France during that era and held in the Jesuit library until the French Revolution when the order’s collection was confiscated and used as the basis for a public library.

Cordonnier says the Shakespeare First Folio will be a “treasure among many treasures” at the Saint-Omer library that holds a collection of 50,000 books and manuscripts dating from the 7th to the 19th century. The library also holds one of only 48 existing copies or partial copies of the 15th century Gutenberg Bible, one of the world’s most valuable books.

The First Folio will not go on general display, but will be scanned so it can be consulted on the library website and will be available for other libraries and museums to borrow, he said.